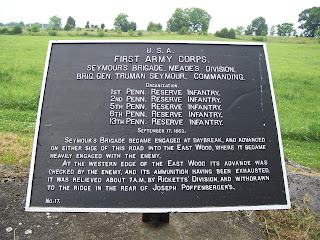 Brigadier General Truman Seymour was born September 24, 1824 in Vermont.  Seymour graduated from the United States Military Academy at West Point in the famous class of 1846; he finished 19th out of a class of 59 cadets and was assigned to the artillery.  He served in the Mexican War and the Seminole War prior to the Civil War.  Seymour began his service with the Army of the Potomac in June 1862 in the Fifth Corps.  He was transferred to John Pope’s Army of Virginia just prior to the Battle of Second Bull Run where he commanded the 1st Brigade, 3rd Division, III Corps.  At the time, the brigade consisted of the 1st, 2nd, 5th, and 6th Pennsylvania Reserve Infantry.  After the reorganization of the Union forces in Washington following Pope’s defeat, the Pennsylvania Bucktails (13th Pennsylvania Reserves) joined the brigade, which became the 1st Brigade, 3rd Division (commanded by George Meade), I Corps (commanded by Joseph Hooker).  As such, the brigade was a part of the Right Wing of the Army of the Potomac as it advanced into Maryland in early September.  The First Corps participated heavily in the September 14 Battle of South Mountain, doing all of the fighting at Turner’s and Frosttown Gaps.  Seymour’s men cleared the latter of Confederate forces but suffered heavily for it, losing 171 men.  The First Corps reached the east side of Antietam Creek and camped at “the forks of the Big and Little Antietam.”  In this position, Hooker occupied the right of the Army of the Potomac as it gathered on the east banks of the Antietam.  Thus, on September 16, Hooker’s Corps, including Truman Seymour’s brigade, would be in position to open the ball on the west side of Antietam Creek.


By 2 p.m. of September 16, George McClellan was ready to begin his operations against the Army of Northern Virginia.  He ordered Hooker’s First Corps to cross the Antietam at the Upper Bridge and Pry’s Ford.  Seymour’s Brigade and the rest of Meade’s Division crossed at the Upper Bridge at approximately 4 p.m.

Meade led the advance of the First Corps and, once the bridge was crossed, moved north up the Williamsport Road, which paralleled the west bank of Antietam Creek before shifting northwest towards the Hoffman Farm.  Meade’s Division turned due west when it reached the Hoffman Farm and began advancing towards the Hagerstown Pike.

At about this time, reports reached Hooker of an enemy presence to his left.  In response to this threat, Hooker posted the 13th Pennsylvania Reserves, better known as the Bucktails for the deer tails that they wore in their hats, as skirmishers in advance of the corps.  This regiment was armed with breech-loading Sharps carbines, which greatly increased the rate of fire and accuracy of the soldiers in the regiment.  The Bucktails turned south as they reached the farm of Martin Line, just east of the Smoketown Road.  Colonel Hugh McNeil, commanding the Bucktails, deployed four companies as skirmishers facing south on either side of the Smoketown Road; the remaining six companies, as well as the 6th Pennsylvania Reserves, were held in reserve.  The Pennsylvanians advanced steadily southward until they encountered dismounted troopers of the 9th Virginia Cavalry, supported by Confederate infantry, on the north edge of the East Woods around 5 p.m.


The Confederate infantry were the seasoned veterans of the Texas Brigade.  When word had reached John Bell Hood and Jeb Stuart at about 3:30 p.m. that Union soldiers were crossing the Antietam above their left flank, Hood moved his division to the southern edge of the plowed field on the David Miller farm and faced them north.  The left of the line sat on the Hagerstown Pike while the right rested in the East Woods.  When the Pennsylvanians advanced after driving the 9th Virginia Cavalry south from the Martin Line farm, they ran into the 5th Texas, which was posted in the northern edge of the East Woods.  Seeing this resistance, Colonel McNeil ordered his remaining six companies to support his skirmish line.  The regiment deployed west of the Samuel Poffenberger farm with four companies on the west side of the Smoketown Road and six on the east side.  A short lull then settled over the field of the 16th as McNeil rested his command for about fifteen minutes so that the rest of the brigade could support him.

Seymour’s Brigade was now deployed with the 13th Pennsylvania Reserves (Bucktails) in the center, being split by the Smoketown Road west of Samuel Poffenberger’s farm.  The 6th Pennsylvania Reserves formed on the right of the brigade and the 5th on the left.  After waiting for the rest of the brigade to come to his support, Colonel Hugh McNeil ordered his men to charge the Confederates in the northern portion of the East Woods.  The Pennsylvanians moved through the plowed field west of Samuel Poffenberger’s and when he was within 15 yards of the East Woods, McNeil shouted to his men, “Forward, Bucktails!” just seconds before a bullet pierced his heart.  McNeil was dead before he hit the ground.  The Bucktails surged around their falling colonel and drove the 5th Texas back into the East Woods.  However, this advance came at a deadly price; in addition to the death of their colonel, 29 more men were killed and 65 were wounded in that charge alone.  McNeil would be sorely missed by his men.  Captain Dennis McGee, who took command of the 13th Pennsylvania Reserves in the wake of McNeil’s death, wrote of McNeil: “a braver man than him the army did not hold.”


In many histories of the Battle of Antietam, much has been made of McClellan’s flanking movement consisting of Hooker’s First Corps.  Most believe that it showed McClellan’s hand to Lee for the coming battle.  However, this is not true.  Lee knew of McClellan’s movement north of the Confederate left flank as it was happening and thus sent Hood’s Division to the area around the East Woods.  The only real effect that this twilight skirmish had on the September 17 battle was to ensure that the Battle of Antietam would begin in this sector of the field.  As one Pennsylvanian wrote, “it was inevitable that the fight should recommence at daylight” in the East Woods.


The night of September 16 must have been a hellish experience for any of the soldiers of Seymour’s Brigade in the East Woods that night.  One Confederate soldier wrote of the night that at “about nine a light rain began to fall and continued most of the night.”  However, soldiers were more concerned about the positions of their enemy than the rain as only twenty paces separated the lines at some points.  Bruce Catton described the tensions between the two armies on the night of September 16 in Mr. Lincoln’s Army:


There was a tension in the atmosphere for the whole army that night. Survivors wrote long afterward that there seemed to be something mysteriously ominous in the very air-stealthy, muffled tramp of marching men who could not be seen but were sensed dimly as moving shadows in the dark; outbursts of rifle fire up and down the invisible picket lines, with flames lighting the sky now and then when gunners in the advanced batteries opened fire; taut and nervous anxiety of those alert sentinels communicating itself through all the bivouacs, where men tried to sleep away the knowledge that the morrow would bring the biggest battle the army had ever had; a ceaseless, restless sense of movement as if the army stirred blindly in its sleep, with the clop-clop of belated couriers riding down the inky dark lanes heard at intervals, sounding very lonely and far off.


Indeed, the night of September 16 must have truly been a nerve-racking experience for the soldiers of both armies huddled in and around the East Woods.  The picket lines were so close that night that each side could hear the other walk in the darkness.  The men of Seymour’s Brigade and their Confederate adversaries slept under arms that night as the skirmishers and pickets of both sides “kept up a desultory fire all night.”  In fact, things were so confusing in the East Woods “that a squad of six men of the enemy [Confederates] were captured, having approached unawares to our [Seymour’s] line.”  A small firefight late on the evening of September 16 did nothing to lighten the moods of soldiers on either side. 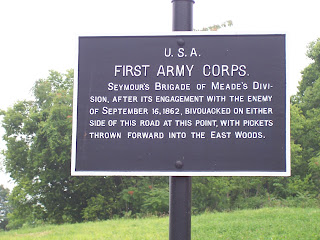 At approximately 9 p.m., Colonel Joseph Fisher of the 5th Pennsylvania Reserves, the regiment occupying the left of Seymour’s line, ordered forward a squad of 24 men under the command of Lieutenant Hardman Petrikin.  This squad would post as pickets to ensure that the 5th would not be surprised by the enemy.  Petrikin and his party edged south along the east edge of the East Woods until they were fired upon by Confederates of the 4th Alabama and 6th North Carolina, who lay behind a fence running east from the southeast corner of the East Woods.  This scattered volley struck down Petrikin and another soldier of the 5th Pennsylvania Reserves and scattered the rest of the squad.  The private died soon afterwards while Petrikin lay mortally wounded in between the two lines.  A few Confederates of the 4th Alabama heard Petrikin’s cries and soon went to help him and bring him back to a field hospital.  Captain William Robbins of the 4th Alabama remembered what happened next:


While I was making arrangements to have him sent back to our field hospital, he spoke to me and said that he felt his wound was mortal; told me his name as I have given it, and then pulling out his watch – quite a fine one – he handed it to me, saying: ‘I make the request of you that if you possibly can you will have my watch sent to my mother, who lives at… Chambersburg, Pa.’  And, also, ‘Tell my comrades of the Union army for me that I died like a soldier should, doing my duty.’  …  He died, as I afterward learned, about sunrise the next morning….

During an informal truce on September 18, Captain Robbins conveyed Petrikin's message to one of his comrades and gave Petrikin's watch to a Union soldier, which eventually made its way to Petrikin's family.  Colonel Fisher called Petrikin “one of my most daring and gallant officers.” This is only one such firefight and one of the many men that would suffer on the dark, rainy night of September 16 as both armies held their breath for the dawn of September 17.