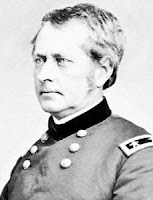 
Hooker's comment that "the rebels would eat me up" says a lot about his mindset on September 16 and the next morning. Recently, while sifting through the memoir of a member of the 1st Pennsylvania Reserves of Truman Seymour's brigade, I found the following passage about what it felt like to be a member of the First Corps on the night of September 16 with the same apprehensions. and what else Hooker may have felt:

Gen. Hooker, who, with all his reputation as a terrible fighter, was ever anxious for the comfort of his men, reported to McClellan during the night that the Pennsylvania Reserve division was so close to the enemy that the battle would have to open as soon as the enemy could be seen, and as the men had been compelled to lie down without their coffee in the evening, and would have to commence fighting in the morning without breakfast, should be strongly reinforced so as to be relieved as early as possible during the day.

This passage comes from John W. Urban's My Experiences Mid Shot and Shell and In Rebel Den. It's an interesting interpretation of Joseph Hooker's thoughts on the night of September 16 and a justification of his subsequent actions on September 17, 1862.
Posted by Kevin Pawlak at 9:18 PM