"How tall was the corn?" Many a visitor to Antietam National Battlefield asks this question when standing on the southern edge of the 24-acre Miller Cornfield. That simple question is typically followed up by a similar one: "Did the corn look the same as it does today?" The answers to these questions are never a one-word answer. Men of different heights viewed the corn's height differently. And today, we plant corn differently than farmers did in the nineteenth century.
Alexander Gardner's photographic capture of the battlefield as it looked in September 1862 would be a useful tool to answer the above questions. Unfortunately, Gardner never photographed the Miller Cornfield, despite taking multiple pictures immediately around it. However, there are enough drawings and veteran sketches that we can reconstruct what the Miller Cornfield may have looked in September 1862.
The two earliest depictions of any cornfield at Antietam come from Alexander Gardner and Alfred Waud. The Piper Cornfield is shown in the background of a photograph showing dead Confederate soldiers lying in the Bloody Lane...

and the Miller Cornfield can barely be seen (the dark line below the tops of the trees) in the background of Gardner's photograph of Knap's Pennsylvania Battery.

Additionally, Alfred Waud sketched what is, according to him, a depiction of the Irish Brigade fighting in a cornfield on the Antietam battlefield (whether or not this is actually the Irish Brigade is a discussion for another day). 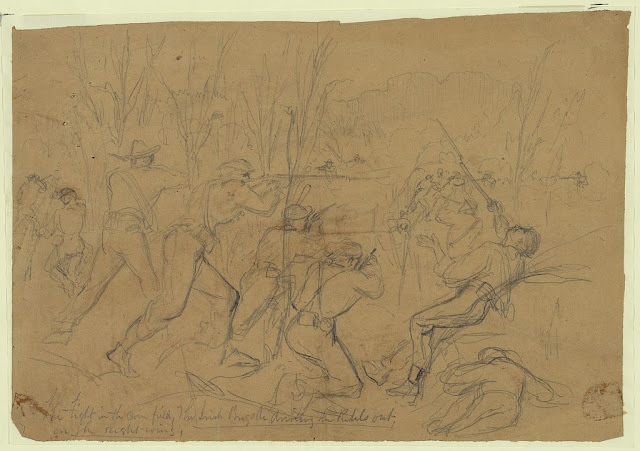 And lastly, Corp. Austin Stearns of the 13th Massachusetts temporarily sought shelter in the Miller Cornfield while regaining his breath. In his diary, he drew a sketch of his time in the Cornfield.

Interestingly, all four of these contemporary pieces of visual evidence of Antietam's cornfields show some cornstalks still standing, both during and after the battle. Incredibly, the intense action did not mow down every stalk of corn.
A well-known postwar sketch that appeared in Battles and Leaders of the Civil War shows an early Federal advance through the Miller Cornfield. The corn stands tall in this drawing but the wide check rows in which corn was planted in the 19th century are apparent here. 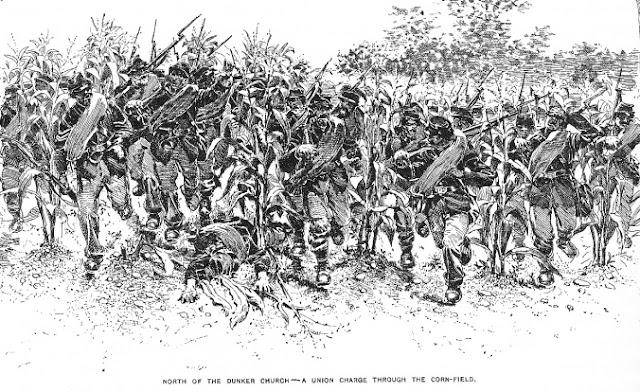 The check row pattern used to plant corn in the 19th century looks like this:
Now that you have a better understanding of what Antietam's cornfields, specifically the Miller Cornfield, looked like in 1862, check out this excellent video about Civil War era cornfields from Civil War Digital Digest if you are interested in learning more.