From Antietam Creek to Stones River: Two Victories that Saved the North and Reshaped the Nation

The summer and winter of 1862 were hard times for the North.  Confederate offensives from Maryland to the Mississippi River sat at the peak of Union setbacks in the summer of 1862.  In the end, these offensives were turned back at Corinth, Perryville, and Antietam Creek; the latter also serving to redefine the nation and the war as it now sought to end slavery in the United States due to the Union victory on the banks of Antietam Creek.  Abraham Lincoln stated that he issued the proclamation strictly “as a military measure” and as such, only slaves then in territories that “the people whereof shall then be in rebellion against the United States…” would “be then, thenceforward, and forever free….”

In order to uphold such “a military measure,” the United States military needed to be winning.  Antietam gave Lincoln the opportunity to issue the proclamation, now he needed a victory in late 1862 to put teeth behind it.  For this and other reasons, three Union offensives went forward in December 1862 to seek a victory and stop Confederate forces from reinforcing each other in different theaters of war.  The first was Ambrose Burnside’s Fredericksburg Campaign; the second was Ulysses Grant’s campaign against Vicksburg; and the last was William Rosecrans’ and the Army of the Cumberland’s offensive against Braxton Bragg’s Army of Tennessee, which culminated in the Battle of Stones River, fought 150 years ago today, and lasting from December 31, 1862 to January 2, 1863.  Burnside’s and Grant’s offensives ended in failure, causing Northern morale to reach one of its lowest points in the war.  Now all eyes were focused on the campaign begun on December 26 in Tennessee as the Lincoln administration looked to Rosecrans and his army to gain support for its emancipation policy, win a much needed victory for the Union, and end any hopes of British recognition of the Confederacy, which, it was feared, would happen as Britain “might succumb to pressure from English textile concerns and recognize the Confederacy in order to ensure their supply of raw cotton.”  The Lincoln administration was facing a similar situation to what it had seen prior to Union victories in Maryland, Kentucky, and Mississippi in the summer of 1862 and was looking to put strength behind the Emancipation Proclamation, one of the most important documents in American history.

Rosecrans’ campaign began on December 26 with approximately 46,000 men from the Army of the Cumberland moving southeast towards Murfreesboro, where Braxton Bragg’s Army of Tennessee, 37,000 strong, waited.  The Army of the Cumberland reached the outskirts of the central Tennessee city on December 30 and prepared for battle.  Both commanders planned offensives but Bragg struck first in the early morning hours of 1862’s last day.  In fighting so fierce that soldiers had to plug their ears with cotton, Bragg’s army had pushed Rosecrans’ to the brink of destruction and bent back the Army of the Cumberland’s line into a V-shape.  Rosecrans’ army had bent but not broken.

That night, as 1862 turned into 1863, Rosecrans held a council of war.  Knowing of the dire straits that the Union war effort was in, Rosecrans’ and his subordinates determined to fight it out against Bragg.  As George Thomas put, “This army does not retreat,” and indeed it could not retreat and give the North a third defeat in December 1862.  Thus, Rosecrans would hold his lines outside of Murfreesboro on the banks of Stones River.

150 years ago today, on New Year’s Day, there was only light skirmishing but the next day witnessed the defeat of another of Bragg’s attacks and ended the Battle of Stones River.  On January 3, Braxton Bragg and his army retreated from the field.  Of 46,000 men engaged on the Union side, 13,249 were casualties, a rate of 28 percent; 37,000 Confederates were engaged in the battle and lost 10,266 men, or a 27 percent loss.  Where the desperate fight to define the nation at Antietam is the bloodiest day in American history, Stones River stands as the Civil War battle with the highest casualty rate, totaling out at 28% and it equally served to save and define the nation in a time of crisis.

Though it is often an overlooked battle, the Battle of Stones River had a great impact on the war.  Firstly, it served to strengthen Northern spirits after the defeat of Grant at Chickasaw Bluffs and Burnside at Fredericksburg, a defeat which caused Abraham Lincoln to utter his famous words, “If there is a worse place than hell I am in it.”  After Rosecrans’ defeat of Bragg, Lincoln wired back “God bless you, and all with you!”  When speaking eight months later of the victory, Lincoln told Rosecrans: “I can never forget, whilst I remember anything, that about the end of last year, and beginning of this, you gave us a hard earned victory, which, had there been a defeat instead, the nation could scarcely have lived over.”  Not only did Rosecrans’ victory potentially save the war domestically, it also may have done so from a foreign standpoint.  The threat that the British might recognize the Confederacy in order to supply themselves with the South’s cotton was a very real one in late 1862.  When Rosecrans’ campaign began, Henry Halleck, general-in-chief of all Union armies, told Rosecrans that his campaign “may be, and perhaps is, the very turning point in our foreign relations.”  Indeed, it did serve to dissuade the British from recognizing the Confederacy.  Last but not least, on the 150th Anniversary of the issuance of the final draft of the Emancipation Proclamation, the Union victory at Stones River provided a much-needed rise in support of the Union war effort and its aims, which was now to free the slaves in territory held by Confederates.  Peter Cozzens, author of No Better Place to Die: The Battle of Stones River perhaps put it best when he wrote, “Bragg’s retreat after the battle [of Stones River] gave the North a victory at a time when defeat would have made the Emancipation Proclamation look like the last gasp of a dying war effort….”  Just as the victory at Antietam gave Lincoln the opportunity to announce the Emancipation Proclamation, the victory at Stones River garnered support for it and turned it into a main aim of the Northern war effort.  The blood spilt on the banks of Antietam Creek and the banks of Stones River had not been in vain and served to reshape not only the course of the Civil War but the nation as a whole. 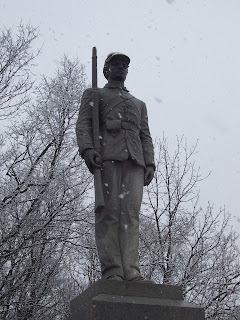 Burlingame, Michael.  The Inner World of Abraham Lincoln.  United States of America: Board of Trustees of the University of Illinois, 1994.

Hess, Earl.  The Civil War in the West: Victory and Defeat From the Appalachians to the Mississippi.  Chapel Hill, NC: The University of North Carolina Press, 2012.