"A sort of clown": The Appearances of Lee, Longstreet, and Jackson in the Wake of the Maryland Campaign

In times of war, nation's looks to their heroes. Few heroes ranked as high in the eyes of the Confederate citizenry in the fall of 1862 than Generals Robert E. Lee, James Longstreet, and "Stonewall" Jackson. They carried the war successfully from the gates of Richmond to Abraham Lincoln's doorstep and beyond the Potomac. Southerners yearned for news of the three men and tried to picture their heroes in an age before personal portraits were universally circulated.
The war correspondent of the Columbus (GA) Times penned the following descriptions of what Lee, Longstreet, and Jackson looked like following their campaign into Maryland. It was reprinted in numerous papers, but this article has been pulled from the November 4, 1862 issue of the Staunton Spectator (VA).

General Lee has, I believe, won his way to everybody's confidence. In appearance he is tall, portly and commanding. His dress is usually a plain Brigadier's uniform, a black felt hat, with the brim turned down, and he wears a short grizzled beard all round his face. He has much of the Washingtonian dignity about him, and is much respected by all with whom he is thrown. At Sharpsburg I saw him on the field during the heat of the action. He was surrounded by his staff and a perfect squadron of couriers. He was engaged in calmly viewing the storm of battle, and giving orders in a manner of cool reliance. Aids and couriers were hurrying to and from the right, left and centre, and the whole disposition of forces seemed under his perfect control. 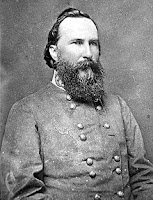 General Longstreet is stout and fleshy, and of good height, and has a quiet courageous look. He seems full of thought and of decision, and his face makes an agreeable impression alike on new and old acquaintances. He is characteristically a fighting man--none can equal him in forcing a strong and well fortified position, and General Lee showed his appreciation of an old tried soldier, when he patted him on the shoulder after the late battle and said, "My old war horse!" In this engagement he was second in command of the army, and his old corps keenly felt the need of his able handling.

I was surprised at Stonewall Jackson's appearance. He has been described as a sort of clown. I never yet saw him riding with his knees drawn up like a monkey, and his head resting upon his breast. He has a first rate face, and seems a plainly dressed Captain of Cavalry, with an unpretending Staff. His uniform is fine enough, certainly, for the hard life he leads. But the imagination, is piqued, you know, by the absence of pretension, as "a King in grey clothes." Stonewall can't like to come about the army much. The boys keep him bareheaded all the time. When they begin to cheer him he usually pulls off his hat, spurs his fine horse, and runs through, greeted with cheers every step for five miles.
Posted by Kevin Pawlak at 7:49 PM