A Game of Numbers: Robert E. Lee's Assumptions about the Federal Garrisons in the Shenandoah Valley

Standing and fighting at Sharpsburg. Pickett's Charge. Each of these decisions could rightfully be labeled as Robert E. Lee's greatest mistake during his Civil War career. But one that often flies under the radar is the decision Lee made earlier in the Maryland Campaign to divide his army and send a large portion of it into the Shenandoah Valley to subdue the Federal garrisons positioned in Martinsburg and Harpers Ferry. A bold plan to be sure, this plan alone was not the undoing of Lee's campaign. Instead, it was the assumptions he made about how quickly his soldiers could open the Confederate supply line in the Shenandoah Valley.
Robert E. Lee was aware of the Union garrisons in the Valley before his men set foot on Maryland soil. But his crossings near Leesburg armed him with the belief that his intervention between those garrisons and Washington City and Baltimore would force the evacuations of Martinsburg and Harpers Ferry. It did not. Before Lee could advance his army farther north into Pennsylvania, he had to deal with the enemy in his rear to open the Valley as a supply route and, if needed, route of retreat back to Virginia.
On the evening of September 9, 1862, staff officers and couriers emanated from Lee's headquarters outside of Frederick. The riders delivered multiple copies of Special Orders No. 191 to Lee's subordinates. The orders outlined the division of the Army of Northern Virginia into multiple pieces, three of which, led by Stonewall Jackson, Lafayette McLaws, and John Walker, would take different routes to intercept, destroy, or capture the enemy garrisons at Martinsburg and Harpers Ferry. When the orders went into effect the next day, Lee anticipated that these three wings would wrap up the operations in the Valley quickly--perhaps as early as September 12--before the army reunited and continued on its trek north.

Why did Lee believe his troops could achieve such a quick victory over the garrisons? No doubt, confidence in his army fueled that assumption, as did the belief that with their lines of communication cut to the east, the garrison commanders would have no other option than to vacate both towns once the Confederates approached. But Lee's intelligence enhanced his assumption. On September 7, Lee wrote one of his subordinates that Julius White's Winchester forces were "stated to have retired into Pennsylvania." In reality, White's forces withdrew to Harpers Ferry, where they remained until their capitulation. Lee still believed this intelligence on September 9 when he dictated the contents of Special Orders No. 191. In the section of the orders relating to Jackson's command, Lee ordered him to "capture such of them as may be at Martinsburg." There is hardly a belief of much enemy strength reflected in that phrase. 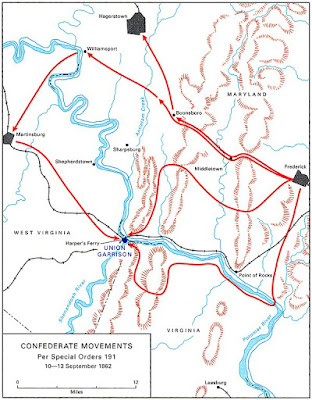 Lee's assumptions thus lie in another piece of intelligence he received while at his Frederick headquarters: the strength of the garrisons in the Valley. The general's contemporary correspondence is mute on this point but a postwar speech by Lafayette McLaws sheds some light on Lee's beliefs and assumptions shortly before Special Orders No. 191 was disseminated from Lee's tent.
Shortly after settling the army's plans with Jackson and Lee's second-in-command James Longstreet, Lee summoned McLaws to army headquarters. He ushered McLaws in and outlined his strategy for opening the Shenandoah Valley. It was McLaws' task to secure Maryland Heights, the mountain overlooking Harpers Ferry that everyone knew was "the key to the position," wrote Julius White. Lee, familiar with Harpers Ferry's terrain, knew that but McLaws did not. "I remarked to the General that I had never been to Harper's Ferry, nor in the vicinity," said McLaws. To Lee, confident of the operation's quick conclusion, that did not matter. He told McLaws "that it had been reported there was a force of 7000 or 8000 men in garrison at Harper's Ferry; but he [Lee] was inclined to think the number was exaggerated, and that there was not, perhaps, more than 3000 or 4000." Lee safely believed that six infantry divisions from his army were enough to mop up the small garrison.
Ultimately, Lee's trust in his subordinates and his soldiers, coupled with faulty intelligence and a poor assumption of the garrisons' strengths, undid his strict timeline for the operation. Likewise, while Lee looked west and north, a building threat in the form of the Army of the Potomac approached from the east and south. Here, too, poor intelligence on the part of Lee's cavalry chief nearly ended Lee's first campaign north of the Potomac River. The assumptions Lee made about the Federal forces in the Shenandoah Valley and around Washington nearly resulted in a serious blow to the main Confederate army in the Eastern Theater.
Posted by Kevin Pawlak at 9:50 PM