"Foolishing Brave": Lt. Col. William Holmes and the Defense of the Burnside Bridge

As the sun was setting on the hills around Sharpsburg, Maryland, on September 15, 1862, the roughly 400 men of the 2nd and 20th Georgia Infantry regiments took position on an imposing bluff approximately 50 feet above the Burnside Bridge. Immediately, the Georgians prepared their defensive positions, felling trees and piling fence rails to create a hasty breastwork. The 20th Georgia defended the western opening of the bridge itself and positions north of it. Lieutenant Colonel William R. Holmes' 2nd Georgia stretched the line south of the bridge along Antietam Creek.
September 17, 1862, is the most documented day of William Holmes' forty-plus year life. The native Georgian was born in 1821 (his birthday is not known). In Burke County, he became a prominent physician before leading Co. D of the 2nd Georgia off to war in 1861. The men of the 2nd greatly respected Holmes and he received a promotion to be the regiment's lieutenant colonel in April 1862.(1) On August 30 at the Battle of Second Manassas, Holmes' leadership inspired his men and filled them with confidence in him.(2)

Tour Photos from McClellan's Observation Post and the Pry Ridge

The more I study the Battle of Antietam, I realize that the battlefield does not end where the National Park Service boundary does. Going even further, the battlefield is not almost entirely on the west side of Antietam Creek. With the exception of the action at Burnside Bridge, the creek is usually seen as a boundary of the battlefield. Instead, the creek actually splits the battlefield. There were plenty of events that transpired on the east side of the creek that influenced how the battle played out and many Union forces, mostly artillery, east of the Antietam that had an impactful role in the battle.
Thankfully, over the past few years, I have had the opportunity of visiting battlefield sites that are privately owned. Specifically, both last winter and now this one, I have been able to walk the positions of the Federal artillery east of the Antietam. Last winter's hike prompted the Guns of Position series. Last weekend, thanks to fellow Battlefield Guides Tom Clemens and Joe Stahl, I was able to walk the Union artillery positions north of the Boonsboro Pike. I will refer you to the Guns of Position series for my takeaways from last year. For this hike, I wanted to share some of the photos I took from the various spots I visited. Enjoy! 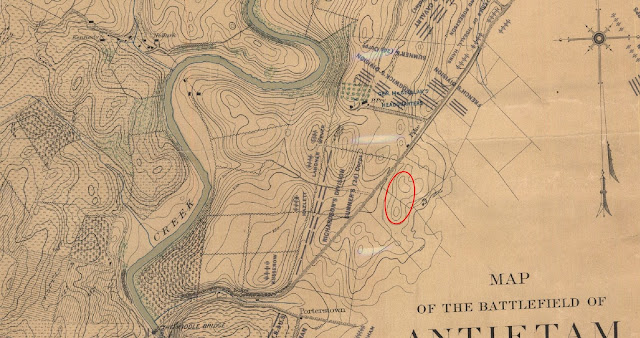 Read more »
Posted by Kevin Pawlak at 7:50 AM No comments: